GPSC GOOD NEWS DECEMBER 2019
25 November 2019
Good news for the GPSC candidates the government will recruit 243 state tax inspectors December 2019.
The notification will be released next December. Qualified candidates will be eligible to graduate. GPSC Chairman Dinesh Dasa has tweeted about this. The notification will be out in December. Qualified graduate candidates will be eligible. GPSC Chairman Dinesh Dasa tweeted Dinesh Dasa tweeted that the Government of Gujarat has decided to recruit 243 State Tax Inspectors Class III. A notification will be issued in December 2019 for that.  Hopefully, this announcement will encourage all graduates who are looking forward to the November 15 announcement. It is important that a few days ago a decision was made by the government regarding the qualification of the non-secretarial clerk. Non-secretarial clerk's qualification is mandated by the government to have at least graduation.  This decision has also been accepted by the students who gave competitive exams.

The Govt Of Gujarat has decided to recruit 243 State Tax Inspectors, Class-III. The #GPSC would publish the notification for the same in December, 2019. Hope this announcement would motivate all those graduates who were awaiting the November 15 advertisement. 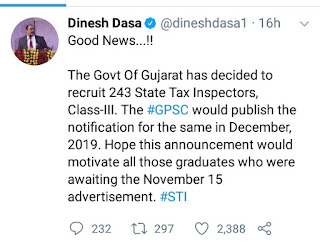