Savitribai Phule was born on 7 January 191 in Naigaon, a small village in Khandala taluka of Satara district in the state of Maharashtra. 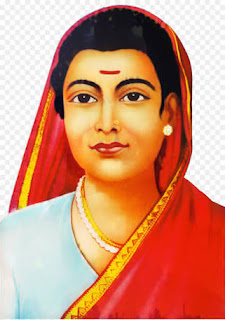 In the 19th century when no woman raised her voice about women's rights, illiteracy, untouchability, chastity, child marriage, widow-marriage.  Savitri Bai Phule raised her voice at that time and made the impossible possible.

According to the customs of the time, he got married to Jyotiba Phule when he was only nine years old.

Jyotiba was thirteen years old at the time of marriage.

While her husband was a revolutionary and a social worker, Savitribai also dedicated her life to social service.

Jyotiba was an educated man, but once at a friend's wedding he had a bad experience of social discrimination.  This experience changed the direction of his life.

After much thought, Jyotiba found the cause of the disease - illiteracy.

He ealized that there is only one cure for this disease - 'education'.

He started working for education, as well as explaining the truth to prevent people from falling prey to curiosities.

His Brahmanical mindset was horrified by his educational work.

At that time Brahmins believed that 'taking or giving education is our birthright.'

These frightened old-fashioned people put a lot of pressure on Dharma (?) Bhiru Govindrao.

To save her father from the crisis, Jyotiba and Savitribai chose to leave their father's house instead of quitting their job.

At that time Jyotiba was only 3 years old and Savitribai was only 18 years old.

Savitribai set some goals in her life, including getting married to a widow, abolishing untouchability, respecting women in society and educating Dalit women.  In the same direction they also opened a school for children.  Schools were started from Pune and since then a total of 18 schools have been opened.

Jyotiba felt that he could not cope with the increasing workload of the school. He had opened a school for Shudras, but who would teach him?

Is a teacher of a higher caste willing to do such an apostate (?) Work?  Then he asked for Savitribai's support.

Savitribai herself was uneducated at that time. But Savitribai got education with the inspiration and guidance of Jyotiba.

Educated Savitribai opened the first school for untouchable girls on May 1, 1918.

It was the first school for any child in India.

Savitribai's work of social upliftment was not liked by the contractors of the society.  He started harassing Savitribai who was going to school.

At first he had to listen to insults.  That is why Savitribai did not waver.

When he left for school, people threw mud, feces and stones at him, but his name became Savitribai. As his harassment increased, his intention to spread his education became stronger

The fragrance of Savitribai's deeds reached the British rulers.

In 18 AD, the then Judicial Commissioner Warden Saheb honored him by unveiling his shawl in public.  And in his speech, Phule praised the couple's openness.

He was the one who opened the door of education for all. When the guardians of our religion were running their kingdom in the name of religion, these British rulers paid homage to the heroic reformers who faced the injustice of religion, so that everyone could be encouraged for such noble work

Along with this great work of education, he continued to strike at the social customs that had become his home.

In 18 AD, he allowed his untouchables to drink water from his own well.

Openly advocated for widows to remarry.

He set up a 'Child Homicide Prevention House' so that women who have been sexually exploited in the society can give birth to a child without fear.

Savitribai, who insists on women's equality, also set up an organization called 'Mahila Seva Sadan' to help women become aware of their rights and learn to live with dignity.

Savitribai Phule and Jyotiba founded the Satyashodhak Samaj on 24 September 1873.  He also started the tradition of widow marriage and on 25 December 1873 the first widow was remarried by this institution.

She was also a poetess.

A tease is felt in his poems.

Empathy for women, a strong desire to teach equality for man, remain the hallmarks of his poetry.