The purpose behind celebrating this day is to bring awareness for the upliftment of half the world's population i.e. women 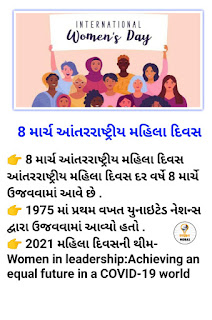 Considering the importance of the role of women in social upliftment, it is planned to increase the scope of education among them as well as to break out of customs and norms.

Today, women are contributing in various fields, including science and technology.

In the state of Gujarat also, the government is contributing to the upliftment of women by making efforts like Kanya Kelvani Abhiyan, Betty Bachao Abhiyan, Prevention of Female Feticide

At present, women are also proving their abilities in areas like space exploration and sports.

Today women are moving shoulder to shoulder with men.

Women are a form of power.

Women struggle hard for their family throughout their lives.  In the present times people have become striving for the upliftment of women.

When did the celebration of Women's Day begin?

The seeds of this day were sown in 1908 when 15,000 women marched to New York City demanding fewer working hours, higher wages and suffrage.

February 28, 1909 marks the first International Women's Day in the United States.  The Socialist Party of America played a key role.  It is worth mentioning that during those days women working in garment mills in New York were very upset due to exploitation.  His strike had been going on for the last one year and he had no one to listen to him.  He was honored by the Socialist Party on 28 February 1909 in support of his struggle.  The women garment workers on their own then won their battle for working hours and good pay.

International Women's Day was first celebrated in 1911 in Austria, Denmark, Germany and Switzerland.  The centenary of this day was celebrated in 2011.

International Women's Day is an annual event recognized by the United Nations, beginning with the labor movement.

One step further, in 2011, then-US President Barack Obama recognized March as Women's Month.  Then began the tradition of honoring women's hard work and success throughout the month of March in America.

The first theme of the day adopted by the United Nations in 1996 was: 'Celebrating the past, planning for the future.'

020: An equal world is an enabled world

The motto of the United Nations for the year 2020 is: 'I am a generation of equality: I feel women's rights.'  (GenerationEquality) It calls for awareness of women's rights along with equality.

Many countries, including Russia, have International Women's Day as a national holiday.  In those countries, flower sales doubled in three to four days around March 8

March is the month of women's history in America.  The achievements of American women are commended every year by the proclamation of the President.

In October 2017, millions of women used the hashtag #MeToo to protest their experiences of sexual harassment and coercion on social media, condemning the widespread spread of the evil.

Abortion was legalized in Northern Ireland and legislation was repealed in Sudan regulating how women should behave and dress in public.

Self Employed Women's Association (Seva) has played a major role in women's rights in India.

March 9, 2010, one day after International Women's Day.  The Women's Reservation Act, passed by the Rajya Sabha, guarantees 33% reservation for women in Parliament and state legislatures.

This is ISRO's Rocket Woman, who has made India's dreams of success on the moon come true.  The two women have worked day and night for these dreams of India.  The first lady is Muttiah Vanitha who is the project director of the mission.  The other woman is Ritu Karidhal, the mission director of Chandrayaan-2.

PV Sindhu was 21 years old when she became the first and only Indian to win a silver medal in badminton at the Olympics.

PV Sindhu, currently ranked third in the world, is the first woman in the country to win a silver medal at the Summer Olympics.  The fact that he achieved this feat at the age of 21 makes it even more remarkable as he is now the youngest player in the country to complete a podium in an individual event.