Rajasthan Royals needed 51 runs in 3 overs. Rahul Tewatia was playing 17 off 23 balls. He was on strike and had no chance of winning. He hit five sixes in the 18th over off Sheldon Cottrell to give Rajasthan a 224-run target chase. This is the biggest successful runchase in the history of IPL. Click here to see the scorecard of the match...

Fifty kills Sanju Sams in the second match in a row

Sanju Samson played a superb innings chasing 224 while maintaining his form. He hit 85 off 42 balls with the help of 4 fours and 7 sixes. He was caught out by keeper Rahul in Shamini's bowling.

Rajasthan wicketkeeper-batsman Sanju Sams has completed 100 sixes in the IPL. He became the 19th batsman to do so. When it comes to Indian players, it ranks 11th. The record for most sixes is held by Chris Gayle (326).

Punjab gave a target of 224 runs

Kings XI Punjab have scored 223 for 2 in their first 20 overs after losing the toss, with openers Mayank Agarwal and Lokesh Rahul giving the team a great start with 183 for 1 in 16.3 overs. Mayank hit the second fastest century by an Indian in the league. He completed 100 off 45 balls. While Rahul maintained his form and scored 69 runs. Apart from him, Nicholas Flood scored 25 and Glenn Maxwell scored 9. For Rajasthan, Tom Karan and Ankit Rajput took 1-1 wickets.

Steve Smith was caught by Shamina on deep cover in Jimmy Neesham's bowling. He hit 50 off 27 balls with the help of 7 fours and 2 sixes. This was the 10th fifty of his IPL career. He also shared an 81-run partnership with Sanju Samson for the second wicket. Earlier, opener Jose Butler was caught by Sarfaraz Khan off Sheldon Cottrell for 4. 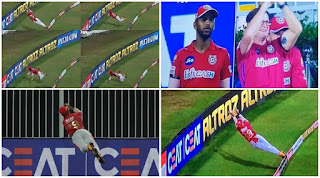 Mayank Agarwal has hit the first century of his IPL career in 45 balls. This is the second fastest century scored by an Indian in the league. The record for the fastest century by an Indian is in the name of Yusuf Pathan. Mayank hit 106 off 10 fours and 7 sixes in a 50-ball innings that hit the Rajasthan bowlers all over the field today.