The Ministry of Human Resource Development has now been renamed the Ministry of Education. The decision was taken during a meeting of the Modi cabinet. During the meeting, the Modi government also approved a new education policy. Detailed information about this will be given by the government in the cabinet briefing to be held at 4 pm.
The bachelor’s degree will be for a period of 3 or 4 years. The academy will become a bank of credit, digital records of student performances will be collected. By 2050, at least 50 per cent of learners must be involved in vocational education through the school and higher education system. A new national research institute will be set up for quality aptitude research, which will be linked to all the universities in the country.
The Ministry of Human Resource Development proposed that the existing name of the Ministry be changed to the Ministry of Education. The proposal has been approved by the Modi cabinet. At the same time, a new education policy has been approved. There will now be a single regulatory body for the entire higher education sector to end the chaos in the education sector.At the same time, Modi has approved a new education policy in the cabinet meeting.Information and Broadcasting Minister Prakash Javadekar said a new education policy for the 21st century has been approved. There has been no change in education policy for 34 years. Educators around the world will appreciate it.
Now it is divided into 10 + 2 and molded into 5 + 3 + 3 + 4 format. This means that now the first five years of school will include three years of pre-primary school and foundation stages including class 1 and class 2. Then the next three years will be divided into class 3 to 5 preparation phase.This is followed by three years of middle stage (class 6 to 8) and four years of secondary stage (class 9 to 12). Apart from this there will be no strict adherence to arts, commerce, science stream in schools, students can now take whatever course they want.

Some special points of the new education polic 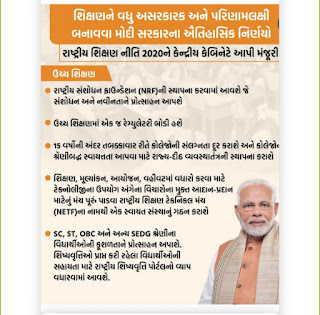