World Hindi Day is celebrated every year on 10 January. 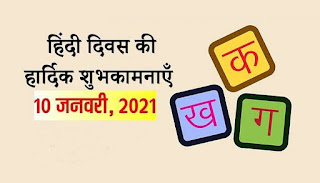 The objective of World Hindi Day 2019 is to create an atmosphere for the promotion of Hindi across the world and introduce Hindi as an international language.

Hindi language was recognized as the main language of independent India by the Constituent Assembly on 14 September 1949.

About 77 percent of the population in India speaks Hindi.

The Embassy of India abroad celebrates this day exclusively.  On this day, unique programs for Hindi on various subjects are organized in all government offices.

Hindi is spoken and understood not only in India but also in Pakistan, Nepal and Bangladesh.  About 60 crore people speak Hindi, of which 26 crore people have it as their mother tongue.

The Hindi and Urdu languages ​​are called Ekduje ki Bhagini because they both have similarities in grammar and vocabulary.

Apart from World Hindi Diwas, 'Hindi Diwas' is celebrated every year on 14 September.

The first World Hindi Conference was inaugurated by the then Prime Minister Indira Gandhi in 1975.

The first World Hindi Conference was organized in Nagpur on 10 January 1975 to promote Hindi (Hindi) worldwide.

The Indian Embassy celebrated the first World Hindi Day in Norway.  After this, the second and third World Hindi Day was celebrated with great pomp under the chairmanship of the author Suresh Chandra Shukla under the auspices of the Norwegian Information and Cultural Forum.

On 14 September 1949, the Constituent Assembly gave Hindi the status of Official Language, since then Hindi Day is celebrated on 14 September.

Hindi is one of the most widely spoken five languages ​​worldwide.

Fiji is an island in Melanesia in the South Pacific Ocean.  In Fiji, Hindi has been given the status of half-official language.  It is also called Fijian Hindi or Fijian Hindustani.

In the year 2017, for the first time in the Oxford dictionary, Hindi words like 'good', 'big day', 'child' and 'Surya Namaskar' were included.  The words Chamcha ',' Drama 'and Jai are also kept.

70 words of Indian languages ​​added to Oxford Dictionary in 2017

According to the calculation of World Economic Forum, Hindi is one of the ten powerful languages ​​of the world.

Hindi is taught as a subject in about 176 universities around the world.

It is also spoken in exactly the way it is written.  Hindi is also the official language of India.  Hindi is one of the fourth most spoken languages ​​in the world. Hindi is spoken in many corners of the world after English, Spanish and Chinese.

Right now there are 26 Hindi chairs running all over the world,

The smallest unit of Hindi language is sound.  This sound is called Varna.  The group of arranging characters is called the alphabet.  Hindi consists of 45 characters based on pronunciation.  They contain 10 vowels and 35 consonants.  There are 52 characters based on the writing, it has 13 vowels, 35 consonants and 4 combined consonants.  The alphabet has two parts: - 1. Vowels 2. Consonants 1. What is a vowel: - The letters that can be spoken freely are called vowels.  Traditionally, the number of vowels is assumed to be 13 but in terms of pronunciation there are only 10 vowels.  1. Vowels based on pronunciation: - A, Aa, I, E, U, Oo, A, Ai, O, Au etc.  2. Vowels based on writing: - A, Aa, I, E, U, Oo, A, Ai, O, Au, An, A:, R etc.  What is a consonant: - Characters which are spoken with the help of vowels are called consonants.  Every consonant has a vowel in its pronunciation.  A consonant cannot be pronounced without a.  The alphabet consists of a total of 35 consonants.  Category: a, b, c, d, ङ category: ch, g, j, jh, j.  P, F, B, B, M, Antastya, R, L, Vishm: Sh, Sh, S, H combined consonants: Ksh, Tr, J, Sr This alphabet is written in Devanagari script.  Sanskrit, Marathi, Konkani, Nepali, Maithili langages ​​are written in Devanagari script.  Ris, , are not used in the Hindi alphabet.

On this occasion, many people including Shivraj Singh Chauhan are sharing this famous line of Hindi writer and poet Bharatendu Harishchandra.

Our language is progress,

All the progress without the knowledge of native language,