He was named Narendranath Dutt.

His father Vishwanath Dutt was an attorney in the Calcutta High Court.  He was regarded as a liberal man and a progressive man in social and religious matters.

His mother Bhubaneswari Devi was a pious woman and observed abstinence and worshiped Vireshwar Shiva of Varanasi to give herself a son.

Narendranath started his studies at home but later he joined Ishwar Chandra Vidyasagar Institute in 1871 and in 1879 he passed the entrance examination.

He was interested in various subjects and he had scholarships in philosophy, history, sociology, humility, literature and other subjects.  He showed keen interest in Vedas, Upanishads, Bhagavad Gita, Ramayana, Mahabharata and Puranas.

He was well versed in both classical music and singing instruments.

From an early age he took an active interest in physical exercise, sports and other organizational activities.

Even when he was very young he raised his voice against hypocritical customs and discrimination based on caste and religion.

Narendranath entered the Presidency College at Calcutta in 1880 and in the second year he changed colleges and took admission in the Scottish Church College in Calcutta.

During this time he studied Western logic, Western philosophy, and the history of the nations of Europe.

From an early age they were interested in spirituality, God-realization and the knowledge of the highest spiritual truths.

He studied the various religious and philosophical methods of the East and the West and met different religious leaders.

He was greatly influenced by the Brahmo Samaj, an important socio-religious body of the time

Their early beliefs were shaped by the Brahmo Samaj.  Brahmo society believed in a formless God, rejected idolatry, and devoted itself to socio-economic reform.

He met leaders like Devendranath Tagore and Keshavchandra Sen of the Brahmo Samaj and questioned them about the existence of God, but they did not get satisfactory answers.

Hearing Ramakrishna's praise of Paramahansa, Narendra first went to him with the idea of ​​logic but Paramahansaji realized that he was the same disciple he had been waiting for for many days.  By the grace of Paramahansa, he was personally visited and as a result Narendra became a leading disciple of Paramahansa.  After retirement he was named Vivekananda.

Swami Vivekanand's guru's name was Ramakrishna Paramahansa.  Swamiji did not trust him completely.  They test everything of Ramakrishna and finally get his answer.

Narendra Ramakrishna and his ideas could not be accepted, though he could not ignore them.  During the five years of training under Ramakrishna's guidance, Narendra was transformed from a restless, confused, impatient young man into a mature young man who was ready to give up everything for the sake of God.  During this time, Narendra accepted Ramakrishna as his guru

At the age of only 25, inspired by his guru, he renounced worldly attachments and became a hermit.  Swami Vivekananda remained a hermit all his life and worked for the betterment of the society till his last breath.  Swami Vivekananda's message inspires people all over the world.

In 1893, the World Council of Religions was convened in Chicago (USA).  Swami Vivekananda went there as the representative of India.  The people of Europe and America at that time considered the enslaved Indians very light.  The people there tried hard not to give Swami Vivekananda time to speak at the conference but the efforts of an American professor gave him some time.  Swami Vivekananda started his speech with "My American brothers and sisters" in this conference, winning everyone's heart in the first sentence.  All the scholars were amazed to hear his discourse.

He was then very well received in America.  There became a large community of his devotees.  He lived in America for three years and gave the people there a wonderful light of Indian philosophy.

"World Brotherhood Day" is celebrated on September 11th.  On this day, Swami Vivekanand delivered his speech in the Parliament of Chicago.

At Ernakulam, in early December 1892, he met Chattampi Swamikal, the guru of Narayan Guru.  From Ernakulam he traveled to Trivandrum, Nagercoil and reached Kanyakumari on foot on Christmas Eve 1892.  At Kanyakumari, the Swami is said to have meditated for three days on the "last Indian rock".  This rock later became known as the Vivekananda Rock Monument

He was suffering from asthma, diabetes and other physical ailments. Vivekananda died in meditation on July 4, 1902.  The cause of his death was a third heart attack.

When it comes to Swami Vivekananda, his September 11, 1893 speech at the Chicago Parliament of Religions in the United States needs to be discussed.

His speech in 1893 is debated in the Chicago Parliament of the United States.  This is the speech that has been presented to the whole world with a strong picture of India.  But few people know what he said in his speech. 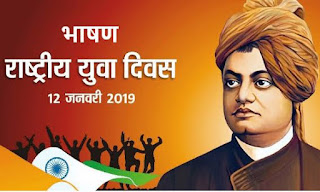