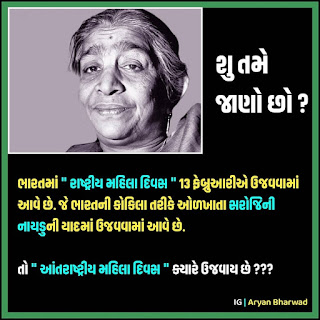 Sarojini Naidu was born on February 18 in a Brahmin family in Hyderabad.

His father's name was Aghorinath Chattopadhyaya, who was a scholar, scientist, philosopher, social reformer and educator.

Sarojini's mother's name was Varadasundari Devi, who was a poetess.

He was raised on the basis of caste discrimination.  He was raised as an Indian instead of a Hindu or a Brahmin.

People used to call him 'Hindni Bulbul' because of his sweetness.

Sarojini Naidu passed the matriculation examination at the age of 18 and became the first in Madras.

In 18 he went to England, where he studied at King's College, London, and Gerton College, Cambridge.

During this time he came in contact with the famous writers Edmund Goss and Arthur Simons.

Sarojini was introduced to Govinda Rajulu Naidu at the age of 18.

In 19, Sarojini had a 'civil marriage' with Naidu.  He had four children: Jayasurya, Padmaja, Randhir and Leelamani.  Of these, Padmaja became the Governor of West Bengal

His first collection of poetry, Diamond Threshold (The Golden Threshold)  Released in 1908.

Then in 1917 he met Gandhiji and his life changed and he became engrossed in the struggle for women's service, social service and satyagraha.

Gharasana was at the forefront of the caning, and was sentenced to 21 months in prison for participating in the 19th Quit India Movement.

Thus, his service to the country from 190 to 19 as a unique disciple of Gandhiji is unforgettable.

Sarojini Naidu became active in politics in 1917 and completed poetry.

Gopal Krishna Gokhale was impressed by his speech at the Indian National Congress session 1905 and urged him to serve the motherland.

Is.  He worked tirelessly to awaken women at the Widow Remarriage Convention in Madras in 19080.

In recognition of his services during the plague epidemic, he was awarded the "Kaiser Hind" gold medal in Hyderabad.  Which he returned against the tyranny of power.

He was always working for the unity of Hindus and Muslims.

Is  From 1915 to 1919, he lectured in various villages and cities of India on welfare, the dignity of labor, the emancipation of women, and nationalism.

He strongly opposed the Moteguenchemsford Amendment and the Rowlatt Act.

He had given sharp speeches against the Jalliawala Bagh massacre in 1916 and martial law in Amritsar.  And distributed literature.

Is.  In 18 he was elected President of the Indian National Congress.

Sarojini organized relief work when the Musi River flooded in Hyderabad in 1908.  For this, the British government honored him with the title 'Kaiser-e-Hind' and a gold medal.

Tortured by the British government's unjust and harsh treatment of Indians, he returned the title and the Gold Medal to the government in 180.

She was the first woman to become governor of the country after independence.  He was the Governor of Uttar Pradesh.

Sarojini Naidu was the first woman president of the Congress

He considered Gopalakrishna Gokhale as his 'political father

In 1925, she became the first Indian woman president of the Indian National Congress session in Kanpur.

In the Quit India Movement, he was sentenced at the Aga Khan Palace.

Sarojini Naidu was a skilled politician as well as a good writer.  At just 13, he wrote the 1300-line poem "The Lady of the Lake."  Wrote the play 'Mehr Munir' in Persian.  His published books are "The Bird of Time", "The Broken Wing", "Nilabunj", "Traveler's Song".