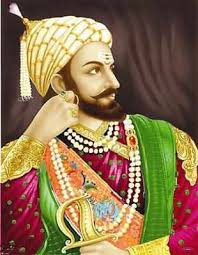 Our country has been the background of brave rulers and kings.  Such great rulers are born on this earth who have recorded their names in history in very golden letters based on their abilities and skills.  One such great warrior and strategist was Chhatrapati Shivaji Maharaj.

It was Shivaji Maharaj who laid the foundation of the Maratha Empire in India.

Veer Shivaji Maharaj is considered to be the founder of the independent Maratha Empire.  When India was ruled by the Mughals and the people of India were terrorized by the Mughals.  While the country was plunged into a slumber of slavery.  Veer Shivaji then revolted against slavery and Mughal tyranny, awakening the sleeping countrymen from their slumber.

There was a great crisis in India at the time of Shivaji Maharaj's birth.  At that time, the Mughal emperor Aurangzeb ruled the throne of Delhi.  Religious fanaticism was at its peak among Muslims all over India under the shadow of Aurangzeb's fanaticism.

Chhatrapati Shivaji Raje Bhonsle was the founder of the Maratha Empire in western India.

Chhatrapati Shivaji Maharaj was born on February 19, 1630 in Shivneri Fort near Pune to a Maratha family.

His father Shahaji held a high position as the king of Bijpur.

He was raised by his mentor Dada Konddev and Jijabai's guru Swami Ramdas.  His mother Jijabai dedicated her life to making Veer Shivaji a higher character.  Shivaji was listening to the stories of heroic warriors along with the religious stories of his mother.

In this way, their bravery and enthusiasm have been crying since childhood.  From an early age he mastered the art of war, spear and bow and arrow.  As a child, Shivaji used to play the game of artificial warfare with his boy.

Shivaji was an expert in many arts.  He was taught politics and religion from an early age

Many call him the Hindu heart emperor and some even call him Maratha Gaurav.

After the coronation at Raigad on 6 June 1674, he became Chhatrapati.

It was Shivaji in 1674 who laid the foundation of the Maratha Empire in western India.  He fought against Aurangzeb's Mughal Empire for many years, so Shivaji Maharaj is worshiped as a brave, intelligent, valiant and the greatest king of history.  Under Shivaji's rule the common people always got justice and that is why even today he is called the king of the people.

In this way, he thwarted Aurangzeb's plans many times.  But a few days later, the Mughal general Mirza Jaisingh with his huge army captured many of Shivaji’s forts.

Shivaji Maharaj was married to Saibai Nimbalkar on 14 May 1640.

Shivaji taught the war skills of the Marathas like guerrilla warfare.

He raised a very large army of Marathas.

Shivaji believed in people of all religions.  There were also many Muslim soldiers in his army.

His main goal was to defeat the Mughal army and establish the Maratha Empire.

Inspired by the life of Shivaji Maharaj, many people gave up their bodies, minds and wealth in the freedom struggle of India.

Violations of women’s rights resulted in punishment in their state.

Shivaji Maharaj's first encounter with the Mughals took place in the year 1656-57.

Veer Shivaji had to appear at the court of Mughal Emperor Aurangzeb on May 1, 1666.  In fact, Aurangzeb called Shivaji by Jaisingh.  He was not properly respected there.  On the contrary, he was arrested and placed under house arrest.

So, they became very angry and they understood Aurangzeb's trick. Aurangzeb wanted to kill him by capturing him.  In this situation, he used his wisdom and discernment.

One day he tricked the Mughals and escaped from the Mughal court.  After cutting their hair, they reached Raigad via Kashi and Jagannathpuri.

He also stayed in Indore for a few days when Shivaji was secretly released from captivity.

When Ramdas released Chhatrapati from Agra, he went through Malwa in Maharashtra.  During this time he stayed for several days at the ancient Dutt temple in Indore and the Khedapati Hanuman temple in Khandwa.

Upon receiving this instruction, Guru Samarth Ramdas planned to release him from his idea.  Fruits and sweets were sent as gifts to Aurangzeb.  The sweets were sent in large boxes.  The plan was to get Shivaji out.  It was under this scheme that Shivaji Maharaj was expelled.  Thus Shivaji and Chhatrapati succeeded in freeing Shivaji.

In 1674, Veer Shivaji was crowned with full respect in the fort of Raigad.  After this coronation, he was called Chhatrapati.  Now Veer Shivaji gradually became powerful.

After the death of Sultan Adilshah of Bijpur, an atmosphere of chaos arose there, taking advantage of which the Mughal emperor Aurangzeb invaded Bijpur.

Shivaji on the other hand also attacked the city of Junnar and captured many Mughal possessions and 200 horses.  As a result, Aurangzeb became angry with Shivaji.

By the time Aurangzeb captured his father Shah Jahan and became the Mughal emperor, Shivaji had spread all over the south.

Death and heirs of Shivaji Maharaj:

Shivaji fell ill in his last days and died on 3 April 1680.  Then his son Rajaram got the throne.  After Shivaji's death, Aurangzeb turned to South India with his 500,000 troops to fulfill his desire to rule India.

Rajaram died in 1700, after which Rajaram's wife Tarabai ruled as the protector of his 4-year-old son Shivaji-2.  The Marathas were finally exhausted in the battle of Swaraj for 25 years and the same Aurangzeb was buried in the Swaraj of Chhatrapati Shivaji

The airport at Shivaji Mana in Mumbai is called Chhatrapati Shivaji Airport.

After conquering Pratapgarh and Raigad forts, Shivaji made Raigad the capital of the Maratha kingdom.

The fort of Kodana was won in the battle of Sinhagad, in which Shivaji's general Tanaji was killed.  Tanaji was also his special friend. Upon hearing the news of Muthu, Shivaji said, "Gadh ala pan singh gela" (Gadh aayo pan singh gayo).  The fort has since been renamed Sinhagarh.

Kodan's fort was won in this battle, in which Shivaji's general Tanaji was killed.  Tanaji