Regarding creation of 4000 new posts of Revenue Talati, Class-3.

Government of Gujarat Revenue Department, Resolution No .: Makam / 1020/29 / Secretariat, Gandhinagar, To, Pay / 1 Introduction: At present, the scope of revenue administration at the village level has extended to the rural area of ​​Chhewada.  In order to provide good revenue services to every village, in order to create one revenue talati posts per two (two) gram panchayats, approval has been given to make 300 revenue talati class-3 posts and a total of Rs.  In-principle permission has been given to make token provision for the new item of three completed) in the budget of the year 2021-2. 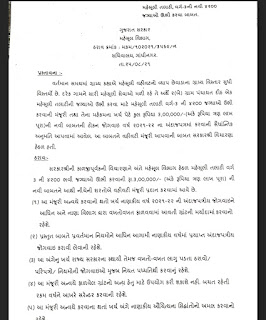 (2) Expenditure in this regard shall be made in the prescribed manner as per the provisions of the permanent as well as from time to time applicable resolutions / circulars / rules of the State Government.

(2) The grant allotted under this sanction may not be used for any other purpose.  The remaining amount will have to be surrendered by the end of the year.

(3) The principles of financial fairness shall be enforced in respect of expenses incurred under this sanction.

(2) It will be the responsibility of the Revenue Department to ascertain whether the salary standards of those posts are as per ROp.2006 / ROp.2016 / PAY MATRIX LEVAL.

(3) Candidate appointed by direct recruitment after receiving regular appointment.  The new enhanced pension scheme as per the resolution dated 19/06/2008 as well as the amendments made from time to time in this regard will have to be implemented.  0