Guru Govind Singhji was born on 5 January 1666 (1723 Pausha Shukla Saptami according to Vikram Samvat) in Patna Sahib (date of birth is also found in many places on 22 December).

People of the Sikh community celebrate Jayanti according to Vikram Samvat. 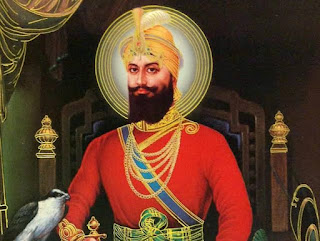 His father was the 9th Guru of the Sikhs.

In the childhood of Guru Govind Singhji, he was known as Govind Rai.

The birth anniversary of Guru Gobind Singh is celebrated by the Sikh community as Prakash Parva.

Gurdwaras are illuminated on this day.  People worship with Ardas, Bhajans, Kirtans.  In the morning there is a morning ferry to the city.  Anchor is also planned.

The boys of the family affectionately called Govinda Govinda.  Guru Gobind Singh spent his childhood in Patna.  There he was playing games like arrow-fighting, artificial warfare with children in childhood.  Because of this, children started accepting him as a chief.  He had tremendous knowledge of languages ​​like Hindi, Sanskrit, Persian, Pul etc.

He founded the Khalsa Panth on the day of Baisakhi in 1699 and made it mandatory for every Sikh to wear kirpan or srisahib.

At the same time, Guru Gobind Singh GA voiced the Khalsa.  Which is the Fateh of Waheguruji's Khalsa Waheguruji.  Fighting the Mughals to protect his religion, he sacrificed his entire family and was martyred in the Battle of Chamkaur with his two sons, Baba Ajit Singh and Baba Jujar Singh.

In November 1675, Aurangzeb martyred Guru Tegh Bahadur, then ascended the throne of his father at the young age of nine.

Guru Gobind Singhji was a very fearless and brave warrior.  It has been written about his bravery,

Guru Gobind Singh also gave five principles for living life, which are called 'five kakara'.  These five things come in five kakars which the Khalsa Sikhs wear.  These are 'Kesha', 'Kadha', 'Saber', 'Comb' and 'Kacha'.  Khalsa disguise is not considered complete without these five.

He sacrificed his entire family while fighting the Mughals to protect his religion.  His two sons Baba Ajit Singh and Baba Jujhar Singh were martyred in the Battle of Chamkaur.  At the same time, two other sons, Baba Zorawar Singh and Fateh Singh, were tied into the living walls by the Nawab of Sirhind.

Guru Gobind Singh, the tenth Guru of the Sikhs, established the Khalsa Panth on the day of Baisakhi in 1699.

After which five people stood one after the other and said that the head is present.  So as soon as we went inside the tent, blood started flowing from there.  Seeing this, the rest became restless.

When Guru Gobind Singh finally went inside the tent alone and returned, the people were stunned.  The five youths were with him, wearing new clothes and turbans.  Guru Govind Singh was examining him.  Guru Govind called 5 youths his Panch Pyare and announced that henceforth every Sikh would wear kadu, kripal, kachho, hair and comb.  The Khalsa Panth was established from here.  Khalsa means pure.

Promise or keep - If you have promised someone, it should be kept at all costs.

Blasphemy, blasphemy and jealousy - We should avoid gossiping or cheating on anyone and we work hard instead of being jealous.

Don't be poor - work hard and don't be careless.

Tithing - Donate one-tenth of your earnings.

Guru Gobind Singhji sacrificed his entire family to protect religion.  Two of his sons were tied to the walls alive.

He died in October 1708.  Since then, the Guru Granth Sahib has become the permanent guru of the Sikhs.